Read an interview in the FT Weekend with Pin Drop Founders, Simon Oldfield and Elizabeth Day, about their favourite places in London. Read more here.

Pin Drop collaborated with Burberry and The New Craftsmen to curate a series of short readings drawn from the collection’s inspiration, Virginia Woolf’s novel Orlando. 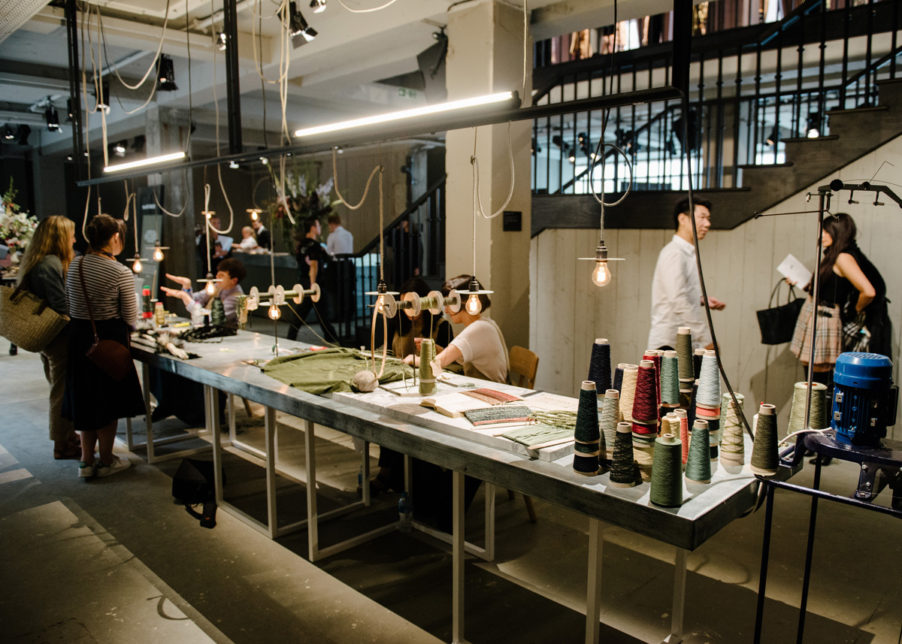 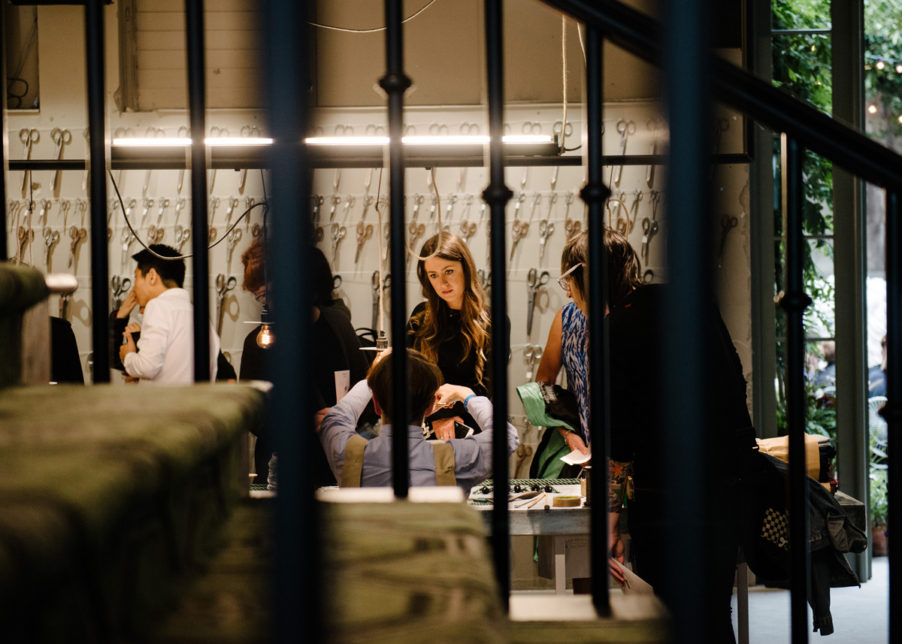 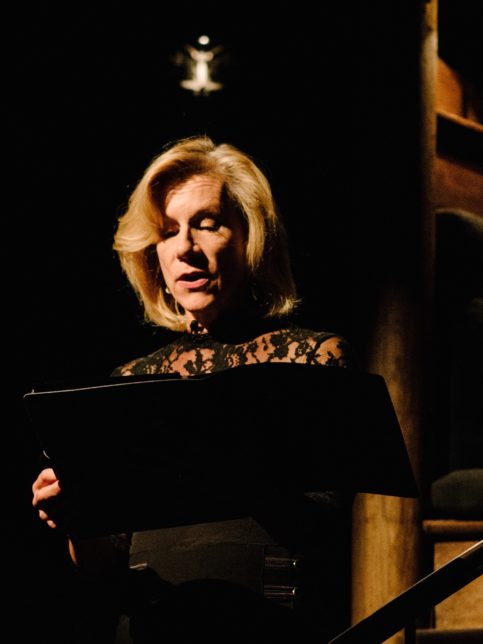 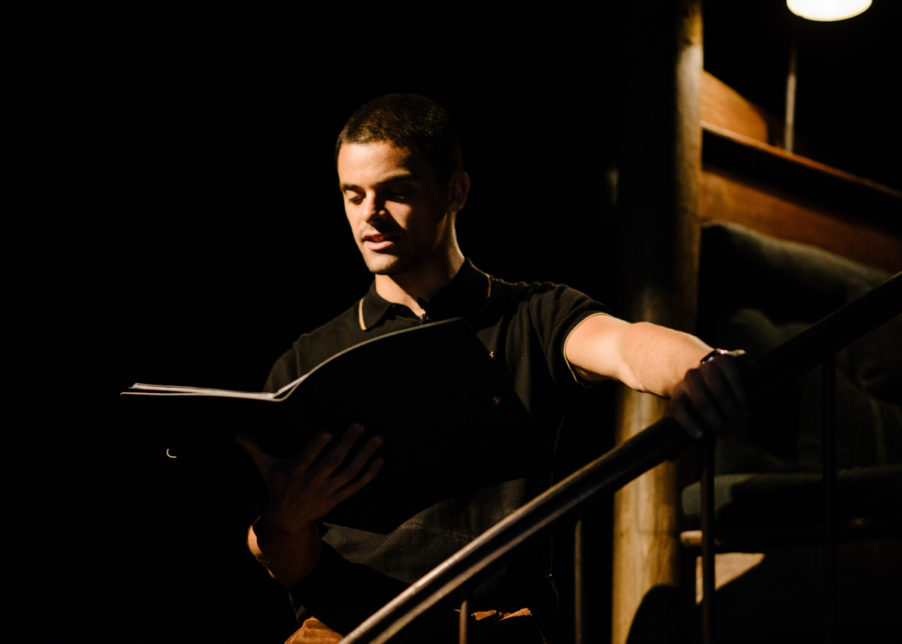 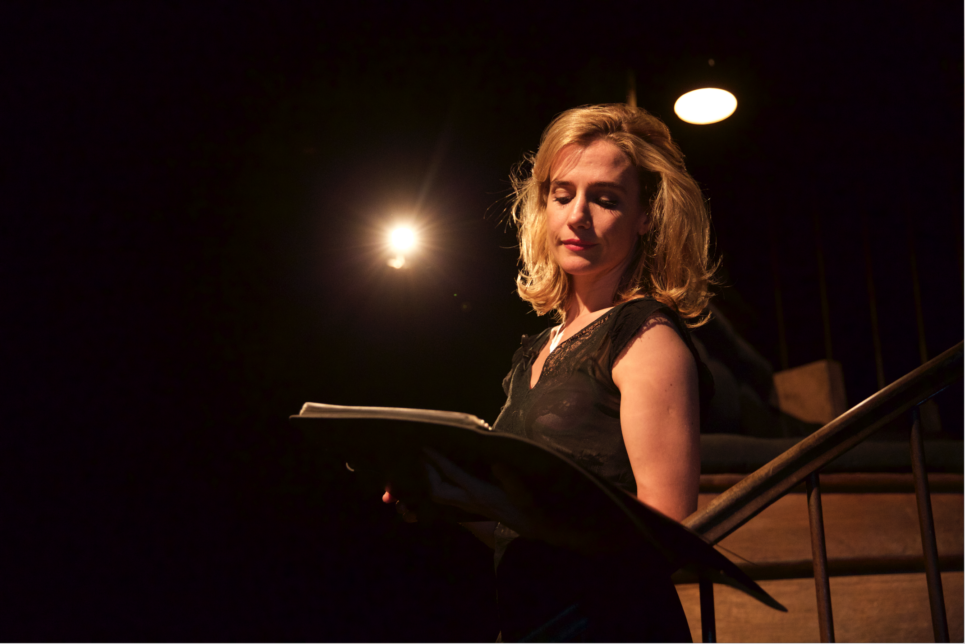 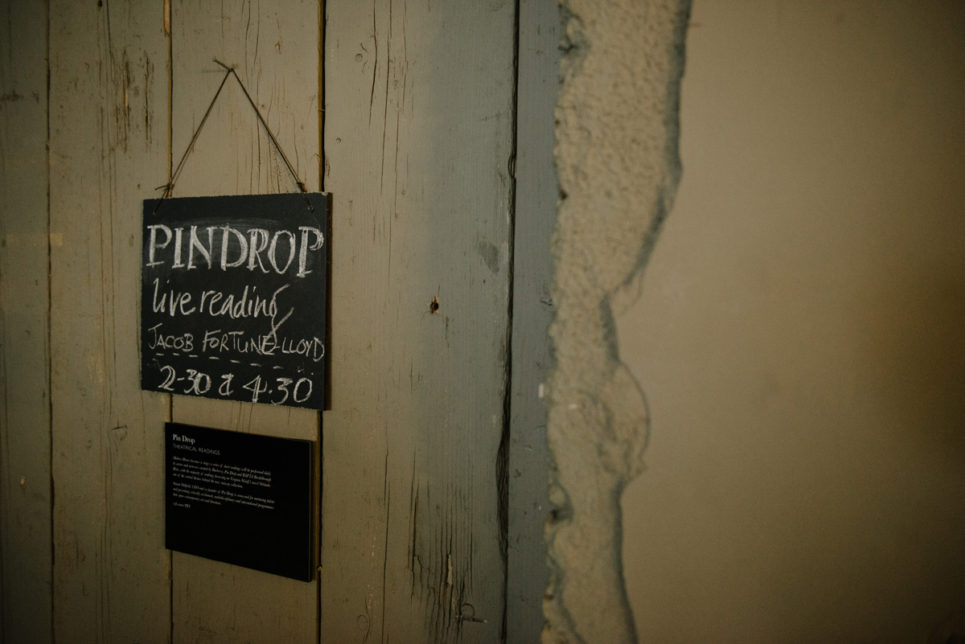 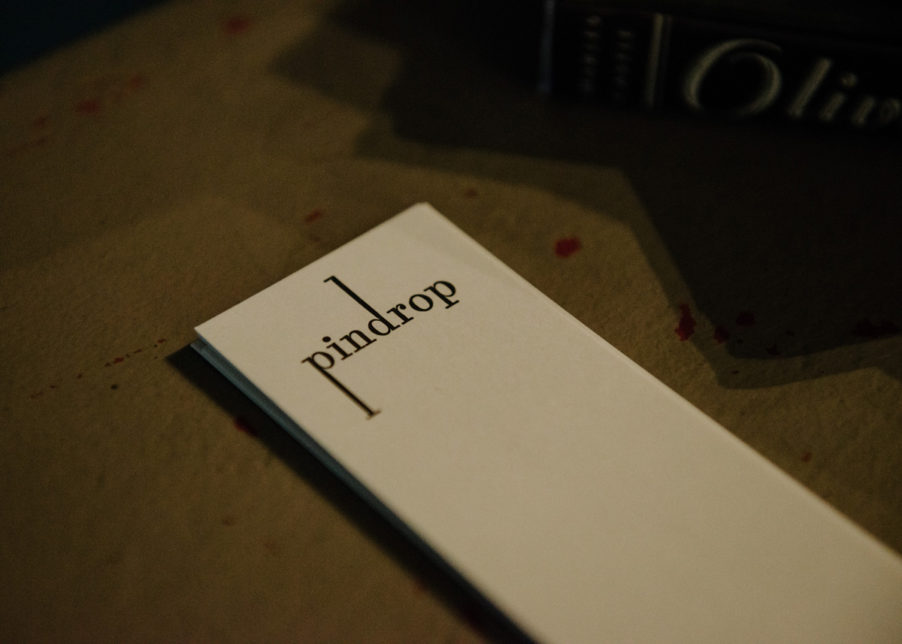 ‘Claire Fuller’s brilliant story is such a worthy winner: both darkly comic and deeply moving, with a modern-gothic undertone that reminded me of Roald Dahl’s Tales of the Unexpected. It’s going to be a wonderful addition to the Pin Drop archive.’

Congratulations to Pin Drop narrator A.L. Kennedy for her inclusion in the long list for the Man Booker Prize 2016, announced earlier today.

Kennedy’s eighth novel, Serious Sweet, takes place over a single day, and is surprisingly Kennedy’s first Man Booker nominated title. To the right is a gallery of images of A.L. Kennedy reading for Pin Drop at past events.

Special mention must also go to Ian McGuire and Virginia Reeves, also included in the list, both published by Scribner UK, who will be publishing Pin Drop’s first collection of short stories in the near future.

The winner of the Man Booker Prize will be announced on 25th October 2016, best of luck to all the authors. You can hear A.L. Kennedy reading for Pin Drop on RTE’s The Book Show back in February 2014 here.

We are delighted to announce the shortlist for this year’s RA & Pin Drop Short Story Award – an award in collaboration with the Royal Academy of Arts.

Juliet Stevenson, who is known to millions for her roles across film, stage and television, will announce and narrate this year’s winning story on 24th June at a special awards ceremony at the Royal Academy of Arts.

Barney Walsh, Under the Waves

We received an unprecedented number of entries from across the globe with writing of an incredibly high standard.  The award, which offers a unique platform for emerging and established writers to showcase their short fiction, is being judged by Pin Drop Co-founders Elizabeth Day and Simon Oldfield, and the RA’s Director of Artistic Programmes, Tim Marlow.

Not to be Missed – Pin Drop in Soho House Magazine

Pin Drop has landed in LA with a full-page feature in Soho House magazine to mark our LA debut with Selma Blair on 7th April.

Pin Drop is delighted to announce that Audible, the world’s leading provider of premium digital spoken audio information and entertainment, has signed up to be our official sponsor for live events in the UK.

Tracey Markham, Country Manager, Audible, added, “The wonderful thing about events like Pin Drop is that they tap into the love we all have for listening to a story. Over the past decade we’ve worked hard to bring new life to listening as a leisure activity through our catalogue of audiobooks and other audio content. We see Pin Drop, which pairs the best short stories with the finest narrators, as a kindred spirit in that everything it does is about communicating the love of listening to the wider public. As such we’re thrilled to support its events as sponsor, and can’t wait to see what they have planned in 2016.”

To mark the partnership, Audible is offering everyone a free trial and audiobook. Download your free audiobook here.

Stephen Fry, at a special event at the Royal Academy of Arts, narrated Ms. Featherstone and The Beast by Bethan Roberts, the winner of the inaugural RA & Pin Drop Short Story Award. You can listen to Stephen’s narration here.

Stephen Fry commented: “Pin Drop is a wonderfully innovative scheme that unites the written arts with the visual. In iconic venues like the Royal Academy, new and established writers have their works read, discussed and questioned by enthusiastic audiences. The presence of the written word in public spaces filled with visual art reminds writers, whose work is so often private and inward, of the capacity of literature to reach out, uniting it with the family of all the arts where it belongs. I really believe in Pin Drop and felt immensely rewarded to be involved.”

The quality of the entries of this year’s award was high and varied and included a cast of wonderful characters from life models to lion tamers. Returning a shortlist of exceptional quality, the judges selected six stories which each do what a good short story should do: invites us into their world, engages from the first sentence and ends up telling us something about ourselves. In such a competitive field, we needed a truly exceptional winner and our choice was unanimous. Bethan Robert’s evocative story Ms. Featherstone and The Beast, is both tender and poignant. It deals with big themes – love, war and loss of innocence – with a restrained lightness of touch. And, like all the best short stories, its impact lingered and continues to do so.

Bethan’s first novel The Pools was published in 2007 and won a Jerwood/Arvon Young Writers’ Award. Her second novel The Good Plain Cook, published in 2008, was serialized on BBC Radio 4’s Book at Bedtime and was chosen as one of Time Out’s books of the year. My Policeman, the story of a 1950s policeman, his wife, and his male lover, followed in 2012, and was chosen as that year’s City Read for Brighton. Her latest novel is Mother Island. She also writes short fiction (in 2006 she was awarded the Olive Cook short story prize by the Society of Authors), and drama for BBC Radio 4. She lives in Brighton with her family.

Earlier this year, we launched a special literature award offering a platform for emerging and established writers to showcase their short stories, in collaboration with the Royal Academy of Arts.  Stephen Fry will announce and read the winning short story, which will be recorded live and included in Pin Drop’s audio archive of narrations by acclaimed authors and actors including Lionel Shriver, Graham Swift, Sebastian Faulks and William Boyd.  The shortlisted authors are:

Wendy Brandmark, The Other Room

The RA and Pin Drop Short Story Award continues our collaboration with the Royal Academy of Arts with this special literature award, offering a unique platform for emerging and established writers to showcase their short stories.  In the spirit of the Summer Exhibition, the competition is open submission. All stories were read anonymously, and interestingly the judges have arrived at an all-female shortlist.  The judging panel includes Pin Drop co-founders Simon Oldfield and Elizabeth Day, and the Royal Academy’s Director of Artistic Programmes, Tim Marlow.

“The Londoner has been marvelling recently at the fact that Professor Richard Dawkins has been quiet of late, by his standards at least. Now the mystery may have been solved: he’s been busy with Jeeves & Wooster.

The atheist and academic was at Soho House for a talk hosted by short-story celebrants Pin Drop last night, where he read tales adapted from, and voiced in the style of, P G Wodehouse. Dawkins writes the stories for his clan gatherings so there are no plans for release, perhaps because, he joked, “the family are pretty litigious with the Wodehouse estate”.

We are delighted to be featured in the culture special issue of ES Magazine, in a piece by Alice-Azania Jarvis on the rise of literary salon. Read more here.

We are delighted to be included in Sam Baker’s article for The Telegraph on the rise of the short story.  Read the full article here, which includes a video of Alice Patten reading for Pin Drop. We kicked off the New Year with a narration by the multi-talented A L Kennedy, author, comedian, broadcaster, Professor of Creative Writing…it’s almost easier to list the things Alison doesn’t do rather than those she does. Alison read ‘This Man’, from her brilliant new short story collection, All the Rage, to an intimate audience in the Bloomsbury apartment of Pin Drop co-founder, Simon Oldfield. The rooms were filled with works of art from 20th Century masters Andy Warhol and Jean-Michel Basquiat to contemporary artists Ryan Leigh, Matthew La Croix and Simon Foxall, so that as Alison read, we were able to let our minds be stimulated by both sight and sound.

The evening was recorded by Irish broadcaster RTE who will be featuring Pin Drop as part of their flagship arts programme, The Book Show, presented by Sinead Gleeson. In fact, aside from the stunning narration by Alison, perhaps the most impressive part of the entire evening was watching the RTE producer, Zoe Comyns, manually hold the sound boom for the best part of half-an-hour without a murmur of complaint. That woman has excellent arm muscle control.

Listen to the full programme here.

Our narration was also featured in Canada’s The Globe and Mail in a wonderful piece written by journalist and author Leah McClaren. Leah instantly understood what Pin Drop was about and totally got to the heart of what makes a short story narration so very special. If you have a moment, do read the article here.

Pin Drop was recently invited by the Crafts Council of Ireland to stage a one-off narration in their fantastic space at Tent London in Brick Lane’s Old Truman Brewery. The exhibition, Vernacular, was being staged as part of London Design Festival and featured the work of over 20 designers including this amazing desk by Irish architects O’Donnell + Tuomey.

To fit in with the overall theme of the event, Pin Drop asked acclaimed Irish actress Lisa Dwyer Hogg (currently appearing at the National Theatre in Richard Eyre’s Liola – and yes, that is Lisa on the poster) to read a short story by one of Ireland’s foremost contemporary writers, Kevin Barry. Lisa read Atlantic City – a poignant, funny and telling short story that even included the opportunity for Lisa to launch into a pitch-perfect rendition of Stevie Wonder’s Happy Birthday. Lisa narrated while sitting in a particularly comfortable chair designed by O’Driscoll Furniture and upholstered in the finest Donegal tweed.

We had a fantastic night, enjoying free Jamesons whisky cocktails (absolutely lethal ones at that) and welcomed a whole host of new Pin Drop attendees, including the actor Stephen Rea and the designer Paul Costelloe.  Thank you to Julia Ravenscroft and Ann Mulrooney and all her team at the Crafts Council of Ireland, our sponsors Audible UK and, most importantly, Lisa herself who was a really brilliant narrator.

Pin Drop in The Evening Standard

Francesca read an extract from her Costa Award-winning debut novel The Innocents at Simon Oldfield Gallery in Mount Street.  She also read a story by Edith Wharton as her own novel is loosely based on Wharton’s The Age of Innocence.

On 11 June, we hosted a wonderful evening at the Regent’s Park Open Air Theatre, holding a Pin Drop narration overlooking the beautiful picnic lawn before a spellbinding production of To Kill A Mockingbird. Highly-acclaimed actress, Juliet Oldfield, read Bernice Bobs Her Hair, a short story by F. Scott Fitzgerald.

Pin Drop at the Houses of Parliament

On 20 June, we held a Pin Drop narration in the Houses of Parliament, offering our guests an exclusive and intimate look inside these iconic buildings. Our venue for the evening was the Jubilee Room, just off Westminster Hall, which came complete with the most fantastic wallpaper Pin Drop has ever seen.

Our first narrator that evening was the acclaimed young poet Owen Sheers, who read incredibly movingly from his prose poem Pink Mist, informed by the testimonies of soldiers who served in Afghanistan. We then welcomed the actress Lyndsey Marshal (Garrow’s Law, Poirot, The Hours, Rome) who took a break from appearing in Othello at the National Theatre to read the Hercule Poirot mystery, ‘The Kidnapped Prime Minister’ – complete with a fabulous Belgian accent.

Afterwards, we drank champagne and munched on delicious Propercorn popcorn – all in the shadow of Big Ben.  The evening was a huge success and marked the start of our special programme of events sponsored by Audible, the UK’s largest provider of audiobooks. Thank you to the Houses of Parliament for being such generous hosts.