He realises ambitious projects spanning two decades, establishing a reputation for nurturing talent and presenting a critically acclaimed international arts, culture and entertainment programme. Simon works across multiple disciplines and oversees all aspects of Pin Drop Studio, bringing together important and influential artists, writers, actors and creatives, often working in collaboration with major institutions and iconic brands including the Royal Academy of Arts, Tate, The Old Vic and BAFTA.

In 2018, Simon edited A Short Affair, a hardback anthology of original short fiction by bestselling authors accompanied by artworks from the Royal Academy Schools’ artists.  Published by Scribner (Simon & Schuster) in collaboration with the Royal Academy of Arts, A Short Affair has received critical acclaim and is released in paperback in 2020.  In 2019, Simon oversaw a UK tour for A Short Affair in partnership with Tate Liverpool, Turner Contemporary Margate, The New Art Gallery Walsall and Pallant House Gallery.  The tour was supported by Arts Council England.

Simon has chaired and participated in panel discussions on art, literature and culture across the globe and conducted in-depth interviews with Pin Drop Luminaries including Prof. Richard Dawkins, Will Self, Russell Tovey, William Boyd and Sir Peter Blake. He produces and directs the Pin Drop Studio podcast series and other Pin Drop Sound & Vision content, and has featured in radio and podcasts including Monocle Radio 24, RTE and the BBC and has written for various publications including Monocle, Harper’s Bazaar and FT Weekend.

In 2015, Simon launched the Pin Drop Short Story Award in collaboration with the Royal Academy of Arts and he is a judge for The British Book Awards 2020.

Simon is founder of Simon Oldfield | Original Culture and Simon Oldfield Gallery in London, where he exhibited works by leading emerging and established artists. He is the arts and cultural advisor to a number of important collections and organisations in Europe and America.  At the start of his career, Simon qualified as a lawyer, practised law in the City of London for several years and volunteered at a human rights and literacy NGO in South Africa, where he met Elizabeth Day.

Simon is supported by an excellent team of people and represented by William Morris Endeavor.

Elizabeth Day is an award-winning author, journalist, podcaster, and co-founded Pin Drop Studio with Simon Oldfield. In 2017, her enormously successful fourth novel, The Party, was published by Fourth Estate and she is the host of the hugely successful podcast How To Fail With Elizabeth Day.

Elizabeth is a feature writer for UK and US publications including New York Magazine and Vogue. She is a contributing editor for Harper’s Bazaar and recent interviews include Claire Danes, Matt Damon and Kiera Knightly. She won a British Press Award in 2004 for Young Journalist of the Year and was Highly Commended in the category of Feature Writer of the Year 2013.

Her critically acclaimed debut novel Scissors Paper Stone won a Betty Trask Award for first novels written by authors under the age of 35. Her second novel Home Fires is also published by Bloomsbury and her 2013 short story Collisions was a top 5 Kindle Singles bestseller.

She has also written features for numerous other publications including Grazia, Elle, Marie Claire and Glamour. She is a regular contributor to the Sky News press preview and has appeared on Radio 4’s Woman’s Hour.

Elizabeth has been close friends with Simon Oldfield for many years, first working with him at a human rights and literacy NGO in South Africa.

Anita brings extensive experience to Pin Drop Studio from a background in museums, photography and production.

Julia works across the programme, bringing her extensive experience to Pin Drop Studio.

Alongside her work for Pin Drop, Julia is Exhibitions Project Manager at the recently reopened Design Museum, London and Project Curator at COLLECT, the Crafts Council’s annual exhibition at the Saatchi Gallery.

Tim Julian is a senior entertainment executive and brings his extensive experience to Pin Drop Studio.

Tim has been involved with Pin Drop Studio from the beginning, advising across a wide range of content, strategy and development.

Francesca Oldfield is a respected photographer and filmmaker, who oversees production at Pin Drop Studio.

Francesca has worked with leading talent including Rihanna, David Beckham and major brands including National Geographic, the Royal Academy of Arts and Conde Nast.  Francesca’s work is also exhibited widely in the UK, Europe and America, most recently in #girlgaze at the Annenberg Space for Photography, Los Angeles.

Etienne de Villiers is the Chairman of Pin Drop Studio.

He is a prominent executive in global media and entertainment, bringing a wealth of experience and knowledge to Pin Drop Studio.  Etienne’s former roles include President of Walt Disney International and Chairman of BBC Worldwide.  He is also an active philanthropist, a former director of Marie Curie Cancer Care and the National Film and Television School Foundation, and most recently he has become involved with the Trussell Trust.  Etienne enjoys art, movies, television, sports, music and literature.

Jacqueline specialises in all aspects of the production, financing and distribution of film and television. Her clients are wide ranging encompassing US studios, banks and other financiers, and independent producers and distributors. She has been named a leader in her field by the Legal Media Group’s Expert Guide to the World’s Leading Technology, Media and Telecommunication Lawyers, Legal Business’ Legal Experts, by Chambers UK and by The Legal 500.

Recent work includes representing TriStar Pictures in connection with its financing and acquisition of Trainspotting 2, and advising CBS Films on its production of the feature film American Assassin starring Michael Keaton.

Bill Damaschke is the President of Animation and Family Entertainment for Skydance Media, where he serves as the key architect setting the overall creative direction and strategy for Skydance. Previously, he spent 20 years at DreamWorks Animation, most recently as Chief Creative Officer, where he was involved in the creative, artistic, and operational direction of the company. His tenure oversaw the release of some of the company’s most successful franchise films, including Madagascar, Kung Fu Panda, How to Train Your Dragon and The Croods. He also oversaw all of DreamWorks Animation’s live theatrical productions, including the award-winning Shrek The Musical.

Bill brings his vast industry experience to Pin Drop Studio and co-produces our live events programme in the USA.

He is a passionate advocate of the arts and heritage architecture. John is based in New York and Los Angeles, and co-produces the USA Pin Drop programme.

Leslie Stern is the former Senior Vice President at the Walt Disney Company and Miramax with particular expertise in global marketing, business development and brand management.

She is based in New York and is currently consultant at VICE media.

Felicity Jones is a Corporate and Commercial lawyer at Watson Farley & Williams. She has extensive experience in a broad range of transactions, with particular expertise in the technology and media sectors. 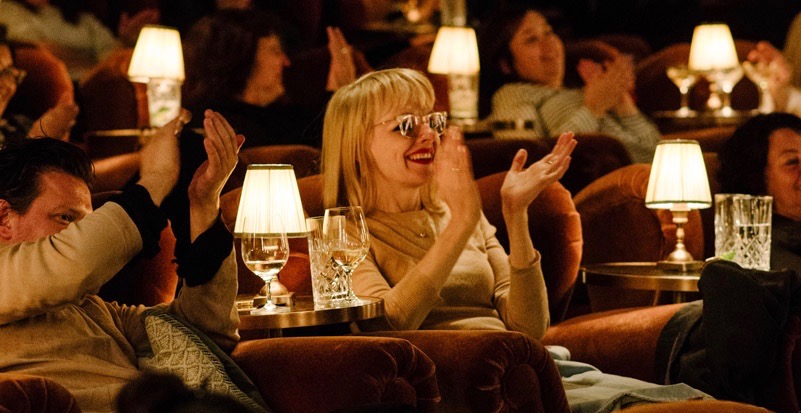 Founded by cultural curator Simon Oldfield with journalist and podcaster Elizabeth Day, Pindrop is an independent entertainment studio.  We are the home of original stories, brought to the world by bestselling writers and newly discovered voices. Here’s how we share it with you…

Pindrop Live.  Join us in London, NY, LA and other major cities across the globe for one of our live events.  Pindrop presents leading authors, actors and groundbreaking talent, who give live readings of original stories, talks and interviews.  Hosted in collaboration with major partners including BAFTA, Soho House, Burberry, Hauser & Wirth and the Royal Academy of Arts.

Our Books. Pick up a copy of A Short Affair, our critically acclaimed anthology of 18 original short stories from Pindrop’s portfolio including bestselling authors Elizabeth Day, Russell Tovey, Lionel Shriver, Ben Okri, Sophie Ward, A L Kennedy, Will Self and Nikesh Shukla, alongside new international writers discovered through the Pindrop Short Story Award. Each story is paired with a unique artwork created by Tracey Emin and other artists from the Royal Academy of Arts.  Edited by Simon Oldfield and available here.  Published by Scriber, an imprint of Simon & Schuster.  Our stories can also be read in other publications.

Pindrop Short Story Award.  The award is non-profit, open-submission and free to enter.  It offers a unique platform for emerging and established writers to showcase their original stories and has unearthed new and exciting writing talent from across the globe.  The winning stories by Bethan Roberts, Claire Fuller, Cherise Saywell and Sophie Ward, narrated by Stephen Fry, Juliet Stevenson, Dame Penelope Wilton and Gwendoline Christie are featured in the Pindrop Podcast here. Since 2015 in collaboration with the Royal Academy of Arts.

Pindrop Portfolio. We represent the exclusive worldwide rights to a large portfolio of original stories across all media, and have several projects currently in development.

Pindrop is a registered trademark.

Pindrop is represented by WME and guided by an exceptional advisory board led by our Chairman, Etienne De Villiers, former President of Walt Disney International and Chairman of BBC Worldwide.